I noticed a pattern tonight between Christian & Daniel Bryan’s WWE World Title wins. Had to make an image to spread this conspiracy TO THE WORLD. 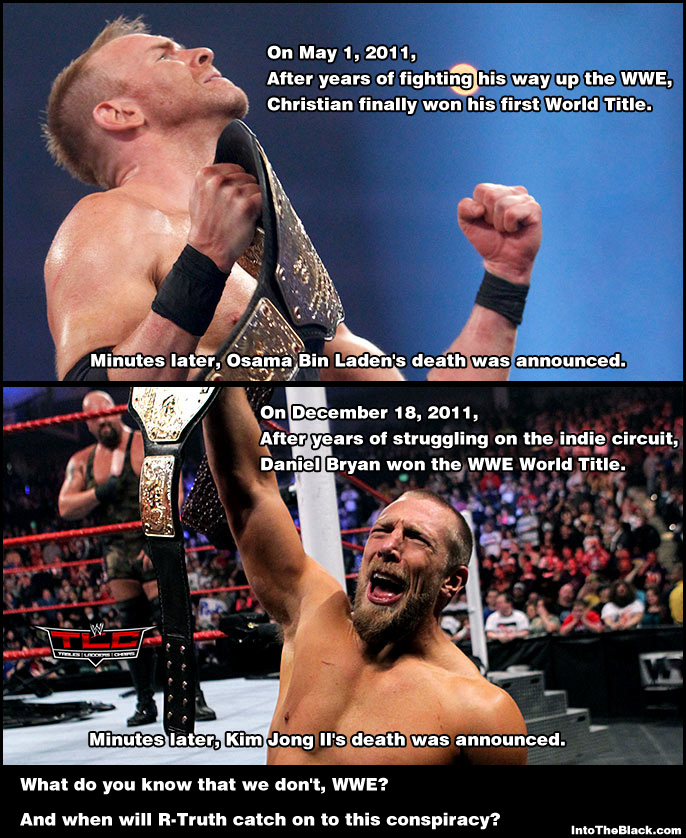 A day to remember

Today was a monumental day. I’d say it’s ten years in the making, but in truth it’s been significantly longer. Finally, after years of blood, sweat, and tears, it’s happened.

Time to turn on the news to see if anything else happened today.

Yesterday was the last Sunday of January, which means one thing: my favorite wrestling pay-per-view, the Royal Rumble! With Wrestlemania in Atlanta coming up in a few months (and tickets in our pockets), I got together with the guys last night to watch it.

Edge vs. Dolph Ziggler
Solid match between these two. Despite his rather unfortunate name (being only the second famous Dolph and the first famous Ziggler), Ziggler can definitely wrestle. Some good back-and-forth, and the ban on Edge’s spear made it interesting (and of course elicited a smile when both the ref and Vickie Guerrero got knocked down.) I don’t know if I missed something (only seen about half of Smackdown in the last few weeks,) but I have no clue why Kelly Kelly came down to attack Vickie; seemed kinda random. Being a Peep, my favorite part was Edge using Christian’s Killswitch to get the win (hopefully that’s a sign he’ll be returning soon.) No surprise to see Edge keep the title; Ziggler’s getting better each week, but he still needs that extra something before he’s at world title level.

The Miz vs. Randy Orton
I know he’s got his detractors, but I’m a big fan of The Miz. He’s one of the best talkers in wrestling today, and he can back it up in the ring. Plus I’ve always been a fan of a champ who isn’t a huge guy, because it’s never a bygone conclusion that he’s going to win; I like champions who seem like they have a chance of losing every time they step in that ring. Hell, the only thing about The Miz that I don’t like is the fact that Michael Cole’s always cheerleading him. I was glad to see Miz retain, even if it did take an interference by the Nexus.

Natalya vs. Michelle McCool vs. Layla vs. Eve
This was originally a handicap match, and changing it to a Fatal 4-way was a good idea. Natalya hitting a double Sharpshooter on Eve & Layla was pretty damn cool, and there was one point in the match where it looked like Eve almost had her cheekbone smashed in. Great ending for the match, with the double pin. No doubt we’re going to be hearing about that on Raw tonight.

40-Man Royal Rumble Match
Ah, the main event! This year’s Rumble match had 40 men in it, rather than the usual 30, which was a welcome addition. My favorite parts:

My friend Christen texted me today to say she was watching WWE Smackdown & was enjoying the Divas match. I of course referred her to a video of one of my favorite matches of all time: Lita vs. Trish Stratus on Monday Night Raw, Dec. 6, 2004.

For my money, Lita & Trish Stratus are the best WWE Divas of all time. They had the whole package: The looks, the attitude, and by god, they could wrestle. And this match was hands down their best work.

The build up to the match was great, with Lita fighting and clawing for a title shot after being out for a year due to neck surgery. The match itself was brutal. Lita took a nasty spill to the outside that had me out of my chair thinking she’d just broken her neck again. Before the match, especially with it taking place in Lita’s home state of North Carolina, I was happy to see that they were making it the main event. After it was over, it was clear why. Six years later, this match still sticks with me.

This is not only the best women’s match of all time, it was the best match of 2004, and an amazing example of telling a story in the ring.

Watching WWE Pay-Per-Views used to be a regular thing for me, but it’s been about five years since I last ordered one; none of my friends in Valdosta were big wrestling fans, so that’s one of the things I missed out on while I was there. So to bring back old times, I went over to James’ last night with Nate & Sean to watch this year’s Royal Rumble (while texting back-and-forth with my brother in California & my friend Krissy who was actually at the event.) The Rumble has always been my favorite PPV, and this one turned out to be one of the best that I can remember.

Let me just preface all this with something: Matt Striker is now officially my favorite color commentator in wrestling. The stuff he came up with throughout the entire broadcast was comedy gold.

Christian vs. Ezekiel Jackson
I’m a big Christian fan, but thought they were going to have him get beat by Jackson here. Great match; Christian took a hell of a lot of punishment and kept coming back from it (the clothesline to the back of Christian’s head was pretty brutal.) Real nice back-and-forth, and I loved seeing Christian slap the hell out of Jackson and then run like mad. But after a number of missed Killswitches, Christian finally nailed one with a great reversal for the win.

The Miz vs. MVP
Nice to see a bonus match added to the card; thought it felt a little light on matches. Not much to say about this match, other than I’m glad The Miz beat MVP. I’m not really a fan of MVP, and The Miz is at least entertaining.

Randy Orton vs. Sheamus
Loved the backstage intrigue with Legacy leading up to this match. It was very slow starting, but once it picked up it was pretty good. I fully expected Orton to win the title in this match, so he’d be going into Wrestlemania as the champ. But with everything that led up to it with Legacy during the show, I wasn’t surprised with the outcome. What I was surprised by was how much the audience was behind Orton both during and after the match. Face turn coming?

Mickie James vs. Michelle McCool
This match was exactly what it needed to be: Mickie destroying Michelle hard and fast. With all the torment she’s put Mickie through over the last several weeks, she got exactly what was coming to her. I still don’t understand why they ever went with a storyline where they continually called Mickie James fat; she’s by far the hottest diva in the WWE right now.

Undertaker vs. Rey Mysterio
Holy crap. I love matches where Mysterio takes on a much larger opponent, and this was no exception. Mysterio busted Taker’s nose open early in the match while flailing to get out of a Tombstone, and just made him look even more feral. Mysterio’s 12-2-18 was pretty awesome, but of course the match could only end way one: a giant wedgie bomb to hell.

Royal Rumble Match
The main event! This had the best beginning of any Rumble match I can remember. CM Punk’s domination of the early part of the match, coupled with his preaching to the crowd when he was alone in the ring, was pure awesome. Beth Phoenix’s surprise entry was really cool to see, and I loved that she eliminated The Great Khali. I would have liked to have seen a stronger showing from some of my favorites (John Morrison, Chris Jericho, Matt Hardy), but I suppose everyone can’t have multiple eliminations. Going into the match, I was worried that they would go the obvious route and have Shawn Michaels come out on top. For a while, it seemed like it was going that way with HBK taking out Triple H and five others. Now, I have nothing against Michaels, but I like Rumble matches that are unpredictable and where it feels like anyone can win. And that’s exactly what happened when Edge made his return. I was hoping he’d be a surprise entrant, but I’ve been steering clear of news sites to avoid possible spoilers. So when Michaels got eliminated and went nuts, and then Edge came out on top as the winner, I was geeking out like crazy.

Oh, and to top it all off it was announced today that next year’s Wrestlemania is going to be at the Georgia Dome in Atlanta! Now let’s just hope I can score tickets when they go on sale before they sell out.