I went to C2E2 last weekend and checked out a couple of the writing panels. One that caught my interest was The Art of Worldbuilding featuring Charlaine Harris (Sookie Stackhouse series) and Jacqueline Carey (Kushiel’s Legacy series), moderated by Chloe Neill (Chicagoland Vampires series.) I jotted down some notes for myself, but I thought I’d share them on here in case they’re of interest to anyone else. 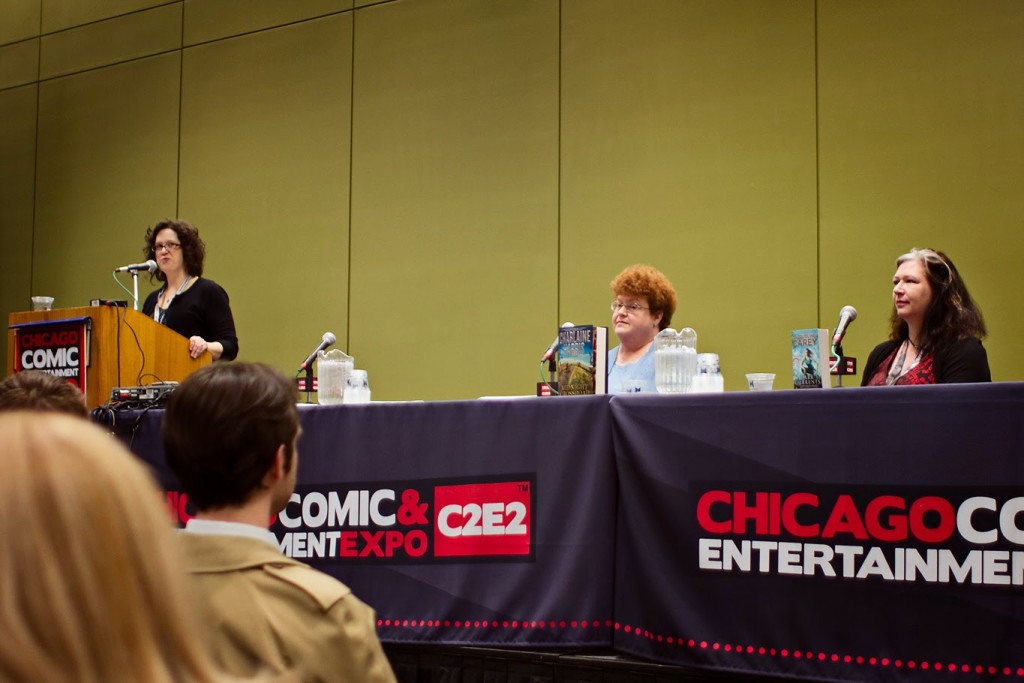 Disclaimer: Everything below is paraphrased as best I could write/remember. I won’t be writing the notes in first person because I’m not comfortable representing my notes as quotes if they aren’t verbatim. If any of the authors or their representatives feel that I accidentally misrepresented any comments, please contact me & I’ll modify/remove as requested.

Q: How much research and planning do you do before you write?
CH: Doesn’t do a lot of advance planning. Sets the basic rules of the world, but lets most of it come in the writing process.
JC: Does a lot of research upfront, then finds out the rest while she’s writing. Loves writing historical fiction because she can pick what she likes from history & change what she doesn’t (as long as she avoids glaring anachronisms.)

Q: How do you keep track of everything in a large series?
CH: Has someone in charge of continuity for her books.
JC: Keeps track of it all in her head.

Q: How do you balance magic in your world?
CH: The magic system must have checks and balances so it’s not too powerful. For example, in her world the vampires are day sleepers.
JC: Started with the idea of why magic exists in the first place. For her Agent of Hel series she went off a variation of the Hermetic Principle: If it is so below (in hell), then it is above (on earth).

Q: What resources do you use?
CN: Uses encyclopedias of vampires/werewolves/witches that show all appearances in pop culture (I believe these are the encyclopedias by Rosemary Ellen Guiley)
JC: The Larousse Encyclopedia of Mythology

Q: How do you use language in your works?
CH: Tried to give each vampire his own verbal ticks based on their origin.
JC: Began writing in clean, crisp, short prose. Finally accepted that it was okay to allow flowery prose. Her characters have different voices depending on their background.

Q: What is your daily schedule like?
JC: Usually writes 4 hours per day, and edits as she goes. She starts by editing the previous day’s work. Writes in Word, but does her research longhand.
CH: Finds that the business aspect can overwhelm the creative. On a good day, she revises the previous day’s work & writes 1800-2400 words.
CN: There’s no right or wrong way to write. Find what works for you that you can do every day to keep writing.

Q (from the audience): How do you keep your characters from being perfect & turning into Mary Sues?
CH: Perfect characters are boring.
JC: If they’re perfect, there’s no room for growth.

Miscellaneous notes (I either can’t remember the question, or I only wrote down one person’s response)
CH: It’s a different process writing/worldbuilding for a novel vs. a graphic novel. In a graphic novel, you can’t write what the artist can’t draw.
CH: Her biggest surprises in writing came in the bad things she could do to her characters.
JC: Does a lot of plot outlining. Because of the scale of her books, she has to keep her characters on a short leash.
JC: When naming characters, she would go back & look at the history of names & use the older versions of modern names.
CN: The advantage of using a major city is there’s a lot of well known places to draw from, but she also makes up enough that she can layer her own places in. People WILL let you know if you got something wrong.
JC: Picks what to write by creative Darwinism. Let the ideas fight it out in your head until there’s one you can’t resist.
CH: When you get writer’s block, go & write something else.
JC: Give yourself permission to make mistakes.
JC: Focus on the details that jump out the most to you. You don’t have to describe everything, just grab the few things that define it the most.
CH: Characters must be anchored by the concerns of everyday life.
JC: She wrote the first Kushiel’s Legacy book in a way that worked as a stand alone. She only wrote the sequel after her agent told her she should.