Bring It On: The Musical

When I got my season subscription to the Alliance this year and was picking which shows I wanted to see, I skimmed right past Bring It On: The Musical. It’s just that a musical based on a cheerleading movie didn’t really sell me. It’s not because I’m a stuffy theatre-goer or anything; I mean come on, I’ve filmed shorts with lawn gnomes & guys practically having sex with hats. It just didn’t catch my interest. But in the last few weeks, a few of my friends have been raving about it, and when Christen said she was interested in seeing it, I figured what the hey.

Turns out, this musical based on a cheerleading movie was pretty damned awesome.

The show’s run at the Alliance is its world premiere, so I’m told there have been some tweaks and such over the weeks. The book and the music are both incredibly solid. It’s really funny, the characters get some nice development, and the songs are really catchy. My only complaint with the script itself is its use of numerous cheap jokes (YouTube, Craigslist, iPhone, etc) that won’t still play ten years from now, and will only serve to date the show. I think the real basis for that complaint lies in the fact that the script didn’t NEED cheap jokes tossed in to make it funny. It’s hilarious without them, and the best moments are the ones that come more naturally.

The cast is fantastic. Amanda Lea LaVergne is perfect in the lead as Campbell; the girl’s a serious triple threat, and has the sort of personality that leaps right off the stage. Hell, all of the primary characters are great. Of particular note, Ryann Redmond, Gregory Haney, Jon Rua, Adrienne Warren, and Kelly Felthaus shined like crazy. On the cheering side of things, Lauren Whitt was a total badass and must have balls the size of grapefruits to do some of the spots she did.

Technically, the show was awesome. They had four giant LCD screens that could be lowered and moved around the stage, providing scenery, windows, video chats, ambiance, or whatever else they needed. The set was minimal, but they made great use of what they had (namely the lockers that could be repositioned for various purposes.) The lighting design by Jason Lyons was REALLY cool and spot on, adding a hell of a lot to the whole production.

Didn’t expect to be saying this, but I’ll be damned. Bring It On: The Musical brought it. 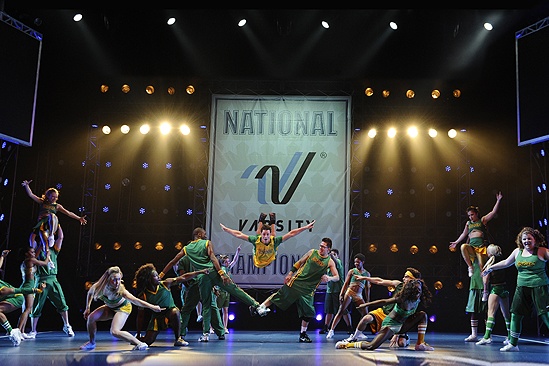 Bring It On. Photo by Greg Mooney of Broadway.com