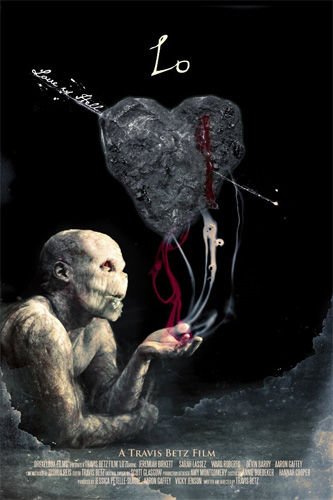 Every now & then I like to make posts about lesser known indie films that I’ve watched & enjoyed (in part because, as an unknown indie filmmaker, I know that word of mouth is the best advertising.) My most recent find is a film called Lo that I watched on Netflix Instant yesterday (and will be on there for another week before it goes away.)

Like a lot of films on Netflix, the description is what caught my eye (that and the completely awesome movie poster):
Lovelorn Justin sees his life change for the better when quirky April lands in the middle of it. When she’s abruptly kidnapped by a band of demons, Justin sets out to rescue her, with the help of the hellion Lo, who has an agenda of his own. Hell, musical demons and oversized rats complicate the path to love in writer-director Travis Betz’s horror-comedy hybrid.

Lo doesn’t easily fit into any one genre, which is something I love about it. It seems to take a lot of inspiration from Buffy the Vampire Slayer, mixing elements of comedy, romance, drama, horror, action, and theatre into one melting pot of goodness. While this ends up being a strength of the film, the first fifteen minutes are a bit slow as it sets the tone and lays out exposition for the rest of the movie. The film is unique in that it all takes place in an empty, black room, with flashbacks playing out like scenes from a play in front of Justin and the demon Lo. It makes for a cool storytelling device, and the further you get into the story and learn the truth of things, the better it gets.

I couldn’t find any numbers for what the budget was on this film other than, well, low. But despite that, the makeup for Lo is pretty freakin’ awesome and the actor behind it (Jeremiah Birkett) does a fantastic job bringing the demon to life. The makeup for the other primary demon, Jeez, is also really good, although it’s not quite as seamless. Aside from a couple moments (Justin talking to his hand), the acting is really solid throughout, and each actor does a good job of encapsulating his or her character.

It can be tough to hit all the angles in a movie like this, but director Travis Betz does a fantastic job of creating a balance that makes you laugh one minute and tugs on your heartstrings the next. Lo is a very cool, quirky take on the myth of “Orpheus and Eurydice,” and one I highly recommend.